Be the first one to rate! Submit Review

Mischief was custom built between 2013 and 2015, designed to explore the Indonesian archipelago and its islands in luxury, style and comfort. Locally constructed by the legendary Konjo Boat Builders of South Sulawesi, Mischief was inspired by the traditional style of Phinisi trading boats commonly found cruising in the region, with a modern twist. The unique charm and excellent service that Mischief offers her guests is what makes her a truly special luxury private yacht.

Guests will have the opportunity to explore Indonesia’s beguiling islands, all the while being catered to by a professional crew handpicked by the owner for in-depth local knowledge and personable service. Great effort has gone in to ensuring that Mischief’s impact on sensitive marine environments is kept to an absolute minimum: a bio-treatment plant breaks down waste, allowing Mischief to cruise in pristine locations with complete peace of mind. 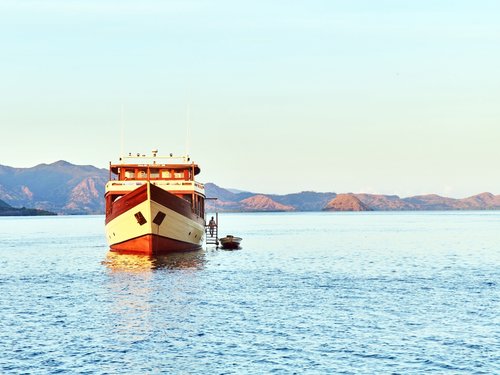 Mischief’s luxurious and contemporary style encourages a relaxing experience in a tasteful surrounds, so guests feel at home from the moment they step aboard. Built from sustainably sourced tropical hardwood, Mischief’s chunky hull supports a large volume that forms the foundations for 3 spacious ensuite guest cabins. A master cabin is located on the upper deck with a private aft facing terrace. Further accommodation can be found on the main deck, where a double and twin cabin are located, each one fitted with its own ensuite bathroom. Mischief’s cabins feature large windows, making the most of spectacular panoramic views. At the heart of the yacht, guests will find an airy dining, bar & lounge area for relaxing indoors.

Wrap around decks on both levels offer excellent accessibility to Mischief’s guest areas and freedom to move between the outdoor social zones. Every aspect of Mischief’s exterior spaces has been designed as relaxing oases. Comfortable deck lounges crafted by local artisans offer a variety of dining and entertaining options. Forward-facing settees are found on the upper and main deck, providing exceptional open-air views and complete privacy. An alfresco dining area on the aft main deck invites guests to gather at a large teak table and enjoy a gourmet feast prepared by Mischief’s talented chefs. 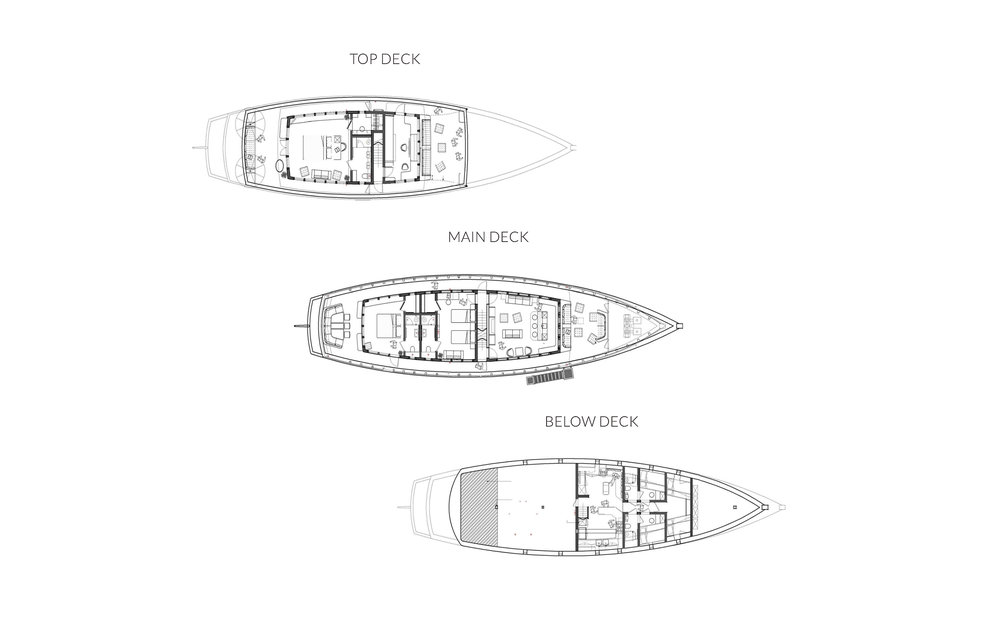 Our dedicated crew is key to the enjoyment of your charter onboard Mischief. We have made sure to offer them the best facilities possible, with 3 climate controlled cabins built to the same finish as our guest cabins, each one with full hanging lockers, a writing/computer deck and access to the shared 2 bathrooms.

As the largest archipelago on the planet, Indonesia is speckled with some 18,000 islands and offers one of the most magnificent cruising destinations on the planet. Mischief’s long-range capabilities mean that cruising routes can be tailored to meet any guests’ personal needs. Whether you’re seeking a leisurely sojourn, active pursuits, or a combination of the two, a trip onboard Mischief will ensure an unforgettable adventure curated with your desires in mind. A broad range of activities is available for guests while enjoying a cruise onboard our beautiful phinisi cruiser, and we are always open to special requests such as surfing, dedicated cultural tours and more.

Indonesia’s islands are famous for incredible scuba diving opportunities, and Mischief’s expert instructor is on hand to accompany you on a series of spectacular dives in your chosen destination, as well as offering certification for aspiring divers.

For thrill-seekers, Mischief is equipped with a broad range of water-sport toys including kayaks, stand up paddle-boards, windsurfing equipment and a custom built trimaran for sailing enthusiasts. Custom trips can be arranged across Indonesia, with some of our favorite destinations including Bali, Lombok, the Gili Islands, Komodo National Park, Alor, the Banda Islands and Raja Ampat.

Mischief cruises throughout the Indonesian archipelago, but during the summer months her homeport is Labuan Bajo in Flores, the gateway to Komodo National Park. A seamless 10-minute transfer with our crew will take you from the airport to the harbour, where your luxury yacht Mischief awaits.

This is typically the starting point for a sailing sojourn around the UNESCO World Heritage Komodo National Park, a string of 29 largely uninhabited, savannah-cloaked isles in the Flores Sea. The three largest islands of Komodo, Padar and Rinca, are home to the endemic Komodo dragon: the largest living lizard on earth and a ferocious, prehistoric predator.

The Komodo Islands lie east of the Wallace line, named after British explorer Alfred Wallace, whose philosophies on evolution contributed to theorist Charles Darwin’s theories. This invisible line separates Asiatic and Australasian flora and fauna, and you’ll find a marked difference between the lush rainforested interior of Bali to the east, and the seasonal open grasslands of Flores. From spring to autumn, the isles turn from vibrant green to parched russet, contrasting at all times with the vivid aqua hues of the Flores Sea. Topography is more than a little dramatic, comprising smoking volcanoes, undulating hills and jagged grassy peaks.

In this striking environment, you’ll have a chance to learn about Indonesian culture in stilted villages where the locals live respectfully and harmoniously alongside the Komodo dragon, which they believe by century-old legend to be a descendant of a dragon princess. Aside from the dragons, these islands harbour a wealth of wildlife including monkeys, wild boar, timor deer, water buffalo and wild horses. The skies are patrolled by a plethora of birds such as yellow-crested cockatoos, frigates, sea eagles and sunbirds.

But perhaps one of Komodo’s biggest draws is life beneath the surface. This is Indonesia’s notorious underwater realm at it’s finest; plunging walls blanketed in hard and soft corals, towering pinnacles, churning currents and colourful shallow reefs that make this just as much as a haven for experienced divers as it is for beginners. Underwater aficionados will find themselves among with huge manta rays, schooling pelagics, and occasionally dolphins and whale sharks. A variety of whale species can be seen from the surface, passing Flores’s east coast during their migration period.

Flores is named after the Portuguese word for ‘flower.’ Venture east of Komodo, along the north coast of Flores and you’ll find a land strewn with pristine lakes and waterfalls, some 50 spectacular dive sites, craggy coastlines and mirror-still mangroves perfect for kayaking and enigmatic caves. Sparkling white and pink beaches, tinted by sprinklings of red coral, surround the island itself. Mount Kelimutu, near the town of Maumere, has three sacred colored lakes that mysteriously change color over time.

Flores is a paradise for trekking and hiking, ranging from low-impact walks to ambitious mountain climbing. A chain of volcanoes stretches the length of this 450 kilometers long and narrow island, creating complicated V-shaped valleys and knife-edged ridges. Trekking can be perfectly combined with cultural visits to small, charming villages and steaming hot springs.

Bespoke trips to Komodo National Park can take in the surrounding islands too, including Bali, Lombok, Moyo, Sumba and even the easterly Alor archipelago.

How to reach Labuan Bajo: Fly direct from Bali or Jakarta.

Mischief cruises throughout the Indonesian archipelago, but during the summer months her homeport is Sorong in West Papua, the gateway to Raja Ampat. A seamless 20-minute transfer with our crew will take you from the airport to the harbour, where your luxury yacht Mischief awaits.

This is typically the starting point for a sailing sojourn around Raja Ampat, a chain of some 1,500 tiny and largely uninhabited islands centered upon the four largest isles of Misool, Waigeo, Sarawati, and Batanta. While Sorong is Papua’s second biggest city and the port is a hive of activity, a few hours of cruising will take to you some of the most remote and paradisiac islands on earth.

Raja Ampat lies east of the Wallace line, named after British explorer Alfred Wallace, whose philosophies on evolution contributed to theorist Charles Darwin’s theories. This invisible line separates Asiatic and Australasian flora and fauna, and you’ll find a marked difference between western Indonesia and the lush, tropical islands of Raja Ampat. Sheer limestone isles shaped into sculptural formations by the tropical seas make up the majority of the landscape, where dense jungle gives way to sugar soft white beaches worthy of a postcard. 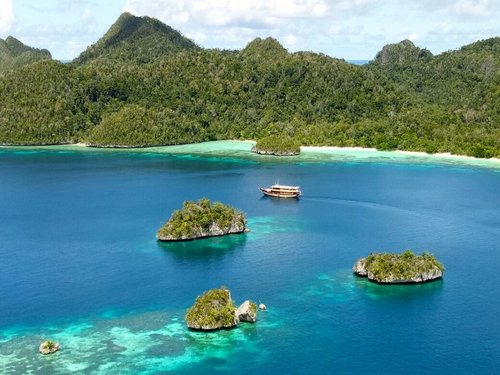 It is difficult to find words that express Raja Ampat’s natural beauty. This remote region has been described as “the last wilderness on earth”, and the wealth of jewel-like green islands cast in the midst of an aquamarine sea is a sight to behold. The jungles here are inhabited by a diverse array of wildlife, coconut crabs, furry tree kangaroos, monitor lizards, paradise kingfishers and the rare red bird of paradise.

Raja Ampat’s reputation for marine life is no exaggeration. This area is recognised as the world’s most bio-diverse marine ecosystem with 1,200 species of fish, 550 species of hard and soft coral, 6 of the world’s 7 species of sea turtle and a large population of manta rays. In 2006, 50 new species were discovered on a researchers’ trip to the Bird’s Head Peninsula region, and every year fascinating and previously unrecorded creatures are discovered here.

A few days sail from Raja Ampat lies Ambon and the Banda Islands. Hundreds of years ago, European explorers would travel across the world in hopes of approaching these highly prized islets. Back in the 16th century, the Banda Islands were the only place in the world where nutmeg could be found, which resulted in their nickname: ‘the original Spice Islands”. Among these islands, you’ll find historical towns brimming with colonial houses guarded by cannons, abandoned forts, active volcanoes and ancient nutmeg plantations amid almond groves. Run island is particularly special – this tiny piece of land was the subject of a long conflict between European colonial powers, so prized that the Dutch swapped Manhattan with the English to lay claim to it. Here you’ll find forgotten ruins reclaimed by the jungle, pristine beaches and some magnificent dive sites teeming with colourful fish among hard and soft corals.

Bespoke trips to Raja Ampat can take in the surrounding islands too, including Ambon and the Banda Islands, Cenderawasih Bay and the easterly Forgotten Islands.

How to reach Sorong: Fly direct from Jakarta, or indirectly from Bali or Singapore via Manado or Makassar.

We take fine dining seriously onboard Mischief; our culinary team thrives on creating inventive and delicious dishes, calling upon experience in top restaurants around the globe. 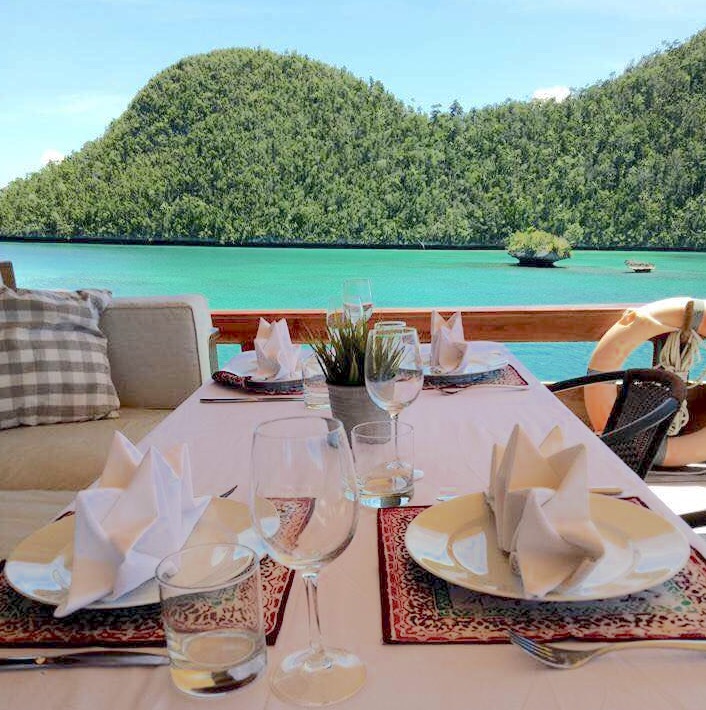 Whether you’re keen to try local Indonesian fare, contemporary fusion cuisine or French and Italian classics, our chefs will craft a tailored menu to suit your desires. For a taste of the Mischief experience, cast your eye over our sample dining menu.

Mischief is equipped with a variety of water-sports equipment for guests’ use among the quiet bays and aquamarine waters of the Indonesian archipelago. Equipment includes:

Rate us and Write a Review

Your request has been submitted successfully.

Appointment confirmation email will be sent upon approval.

We have received your appointment and will send you a confirmation to your provided email upon approval.

Get Directions
Own or work here? Claim Now! Claim Now!
Show all timings